TOUCHING THE UNTOUCHABLES! IN SOUTHERN CAMEROONS 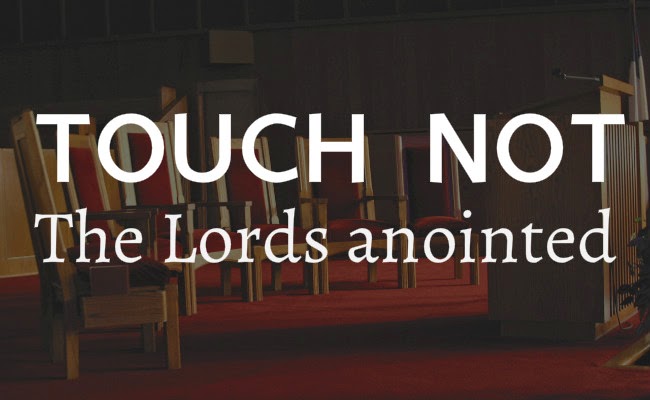 TOUCHING THE UNTOUCHABLES! IN SOUTHERN CAMEROONS

They equally took the Presbyterian Moderator to Court, all anointed men of God whereas somewhere in the Bible it is written ‘touch not my anointed”.

La Republique du Cameroun is to the best of my knowledge the only country in the world that is joking with shepherds of the flock of the Most High God.

This notwithstanding, it is an open war against God. Man, making war against his own Creator is a ridiculous thing to do. Just the mere conception not even the act of taking anointed men of God to court is a big curse. It is senseless, nonsensical, or thoughtless.

All the same, watch out! The eyes of all God’s people and all God’s angels are watching and waiting! The good thing is that men of God are not only innocent, but not afraid of going to court. They should behave the way Jesus behaved before Pontius Pilate – talk little and speak the truth.

The Catholic Bishops all over the world that constitute shepherds in the vineyard of the Lord are not only untouchable by any human creatures; they are not answerable even to them. They are the ministers to the Pope who is the Vicar of Christ; the Bishops are only answerable to him, who himself is pontifical and the Chief Shepherd in the vineyard of the Most High God, and is answerable only to God and to no one else!

Bishops are Priests elevated to the rank of Bishops to act as Chief Shepherds.

Our Lord himself, the highest Priest before his crucifixion was escorted by many people and soldiers. The same thing happened in Southern Cameroons when Southern Cameroonian Bishops had to appear in Court, and so the statement holds, like Christ, like the Bishops.

I have never heard any country in the world where Priests, not to talk of Bishops have been charged to appear in Court except in the Southern Cameroons where the oppressive and annexationists Government of La Republique du Cameroun is terrorizing and violating the rights of the citizens in order to illegally implement their annexation syndrome.

When the Bishops appear in Court!

In the case of Southern Cameroons National Council Activists, men and women taken to Court, the colonial judges of La Republique du Cameroun panicked and sweated. It was the truth of what the (SCNC) activists stoically stood for, that caused the judges to tremble and sweated from the head to their toes and even in their pants.

Our Lord the Chief Priest was taken to Court. He appeared before Pontius Pilate who was wise and washed his hands before all humanity not to have anything to do with the death of Jesus Christ.

The one million dollar question I ask is will they foolishly have the courage to look into the eyes of the Bishops to judge them? Is the judiciary that they the judges adore independent? Aren’t their hands tied like those of the judge of the Supreme Court of La Republique du Cameroun who was forced to proclaim fake results in 1992 Presidential election in favour of Paul Biya? Who has given them the power under the universe to judge anointed men of God?

I am afraid, that if they foolishly undertake that delicate mission of judging God’s anointed people, they would be judging themselves without knowing.

Our Lord in the Garden of Gethsemane prayed and sweated blood, because he was afraid to drink the cup.

This cup to judge anointed men of God is the most bitter cup to drink and only the foolish in the world would drink to have a deadly effect on them thereafter.

It is wise to be wise and foolish to be foolish.

The judges, I repeat should not drink the cup of wrath! They should rather allow the Supreme Commander in Chief of the arm forces, and Supreme head of the judiciary in La Republique du Cameroun to drink that bitter cup himself.