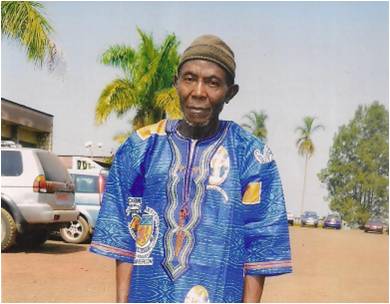 He was born in the year 1947 in a polygamous family of Chesami Jeremiah and Frida Ase Ngwenyin in Ashong Batibo in Southern Cameroons.  He went to Sacred Heart College in 1962 and on completion went to the Government Teachers Training College Kumba to become a teacher by profession.

He holds the ACP and DIPASE of the College of Preceptors London. He was elected FcollP.

He holds the Licentiate in TEFL/TESL from Trinity College London.

He holds a PhD from The International University of Bamenda and a Certificate in Catechesis from Maryvale Birmingham.

He has put a total of 46 years teaching at different levels, primary, secondary, High Schools and Teacher Training. His specialty has been English Language, literature and methodology.

He had been Head of the English Language both in Government High Schools and Teacher Training College.

He is an International Laureate Poet and Distinguished Member of the International Society of Poets. His poems have featured in several anthologies published by The National Library of poetry. His poems appear both in print and in the “Sound of Poetry”. He was called into the International Poetry Hall of Fame in Washington D. C.

He has published many articles both in National News Papers ,National and International Magazines.

The Twin Publication is made up of “The People Cried Nkwifor must Go” and “The Challenges of The Times As I See Them Part II”. Other books published include “The rhetorical War of Words and Rationality”, The Burning Smoke, Echoes from Southern Cameroons”

Other Posts of Responsibility

Before chief Ayamba died, we drew a line of action, holding firm to our motto “The Force Of Argument and not The Argument of Force”

Following instructions from Chief Ayamba before he died we opened a website where we put our information to the whole world on our struggle to restore our independence and sovereignty in the most peaceful manner.

The dream therefore is to see the restoration done by the United Nations of the World.

He took Enda Rosaline as a wife and had two handsome boys with her, she became naughty and things collapsed beyond repairs like the Tower of Babel.

Then came the turn of Atud Briget as a wife. I had a handsome boy with her and thereafter she taught that she had better live in greener pasture. She had the green light and took off and things ended there.

I took the hand of Fon Florence as a wife. She was my dearest and so close to my heart. I did not for one moment believe that  Eternity loved her and needed her more than I did until it happened one sad evening when she was cruelly snatched away. All tears shed from my eyes could not bring her back to me

This latter part of my life is spent in the midst of nature where there is total peace. I try to nurse seeds of palms and oranges and plant, so that even after my demise, humanity may benefit. I still hold tenaciously to writing, singing and making friends from all parts of the world.

My personal philosophy is that “without man, man is nothing”.